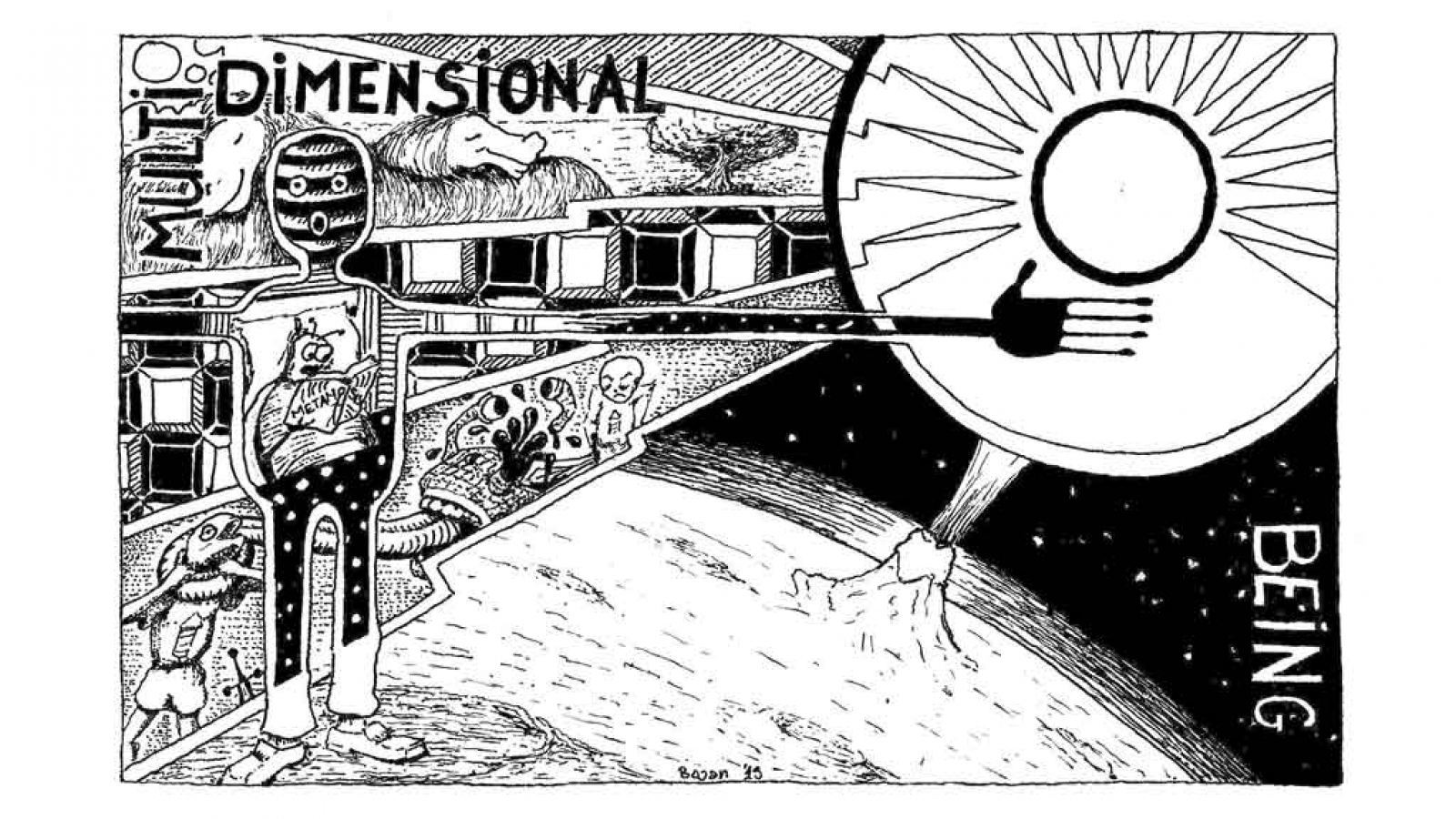 Bojan Mitrovic is an artist, a historian and a translator doing mostly ink drawings in the last four years. In his project “Mezzo gaudio” he deals with the inner world, depicting characters who question themselves.

Short presentation.
«My name is Bojan Mitrović, I am a 46-year-old historian and translator and I have a complicated relationship with many things, including drawing. I picked up a pen on a more regular basis about 4 years ago, when a long-time friend (Vladan Miljković) asked me to illustrate his poetry book, “Kraftverk u Audiju” (Belgrade, 2021), where the Serbian title has the double meaning of both Kraftwerk simply listened to, and Kraftwerk listened to in an Audi car. After finishing these drawings, (the book had a long gestation) I still wanted to draw and I was looking for a subject. It was at this point that the famous phrase of Philip K.Dick flashed in my mind, that “the only problem with introspection is that it can last forever”. And so I said to myself: “Great, I found a perpetual subject, a topic that cannot be exhausted”».

Let’s talk about your project “Mezzo gaudio”…
«It is precisely from this orientation that the works collected in the exhibition “Mezzo gaudio” (Half a Joy) in the “Spazio MOON” in Trieste, in October 2020, were born. As a product of introspection, “Mezzo gaudio” is a potentially infinite project. The next exhibitions of this cycle, in homage to the B-movies, will have the number after the title, so there will be a “Mezzo gaudio 2”, a “Mezzo gaudio 3” etc. I really like a school of psychotherapy called Internal Family Systems Therapy, which postulates the non-existence of the monolithic individual. This is replaced by different personalities who live in each of us, which the practitioner is invited to discover. Consequently, the mechanisms of psychological life resemble more a parliament than a monarchy. Several drawings of the cycle “Mezzo gaudio” are portraits of these inner characters. Other drawings, however, are descriptions of situations seen only in their intimate reality, without the triggering event, which I would instead call interior landscapes. What I try to do is to transform, through graphic rethinking and communication, even the worst experiences into something pleasant, from which comes the title of the exhibition: “Mezzo gaudio” (Half a Joy)».

How would you describe your style.
«The truth is, I don’t know. My Instagram profile is called Naif Ink, and maybe that’s enough, in the sense that I’m a self-taught artist making ink drawings. I am interested in expressing myself, even on issues which are difficult to speak about, much more than I am interested in developing a style».

How are your illustrations born.
«There is almost always an interaction between the image and the word. True, I have been doing urban sketching for some time now and I also do automatic drawings, to improve the technique and speed in the first case and to bring out the subconscious in a sharper way in the second. I think that a few of these exercises might have something to them and maybe one day I will also do two different exhibitions of these works, but I tend to see them as a means rather than an end. What interests me above all is a rational investigation of the inner world. For this reason, very often in the construction phase in pencil, I also use a ruler, not only to define the edges, but also to create focal points and internal subdivisions and therefore emphasise this element of rationality. The initial idea is almost always described in words, as a note on my mobile phone. This verbal part allows me, unlike most of the artists I’ve had the pleasure to meet, to detach myself from the drawing and continue at a later time without the fear of forgetting what to do next. So when the construction phase begins, I already have beside me at least another sheet of paper, for calculations, drafts and inking tests. These sheets stay with the drawing until it is finished. The final step is the inking propper, and I mostly use markers and technical pens, but on the other hand I think this process is quite common for anyone drawing in black and white. I do not use whites, razors or other tools to correct the ink and the only white present is that of the sheet of paper. This might seem a bit crazy and, of course, it is a completely pointless self-imposed limitation, but it is precisely the attention of not making mistakes that makes me relax while inking».

Is there a single work you like the most?
«I should probably give the old songwriters’ answer and say: “the last one”. And that would be true for at least two reasons. On the one hand, drawing as introspection is a process of self-care, and with each drawing I understand something new about myself and others. In fact, at the end of each drawing, there is a period in which the drawing “works on me”, in which I go back to look at it, I keep it in mind even in the smallest details and I try to apply it in everyday life. I try to be guided in life by the drawings I make and to recognize the situations through the drawings I have already made. For this reason, every piece has a special importance to me at the moment in which it is born and when I move on to something new,It means, even quite literally, that I have turned over a new leaf. On the other hand in all honesty, in my artwork, I still see a great deal of room for technical growth and it is a margin that I try to reduce. Although the pure drawing skills are not really my focal point, I always try to bring more technical quality to each new piece».

What should never be missing while working?
«At regular intervals I need tobacco, unfortunately».

Are you working on any particular project or would you like to do so?
«I periodically transfer the notes from my phone to a Word document because, otherwise, they become unmanageable. I do not know if the ideas get angry if other ideas jump the queue, but very often, those waiting to be realized are bypassed by other, new ideas I feel the urgency to work on. Very slowly, I’m coming out of my shell and addressing issues more related to relationships with others. I assume that at some point the artwork that speaks about other people will come to form a cycle of it’s own, but that hasn’t happened yet, and so this cycle doesn’t have a name.
Instead, I do have a name, but not yet the full project, for a cycle of 15 drawings on climate change that will be called “Ecocalypse”. Both as a historian and as a boy who came of age at the time of the Yugoslav Wars, what scares me most about global warming is not what we are doing to the environment, nor what, in terms of natural disasters, the planet will do to us, but I’m deeply concerned about what we are going to do to each other once we realize that there’s nothing left to gain. And, at the end of the day, I’m just a guy who deals with his anxieties through drawing».

A curiosity before leaving us.
«I was born and raised in Belgrade (Serbia), but have spent more than half my life with some relatively short interruptions, in Trieste».

Watch video we dedicated to him